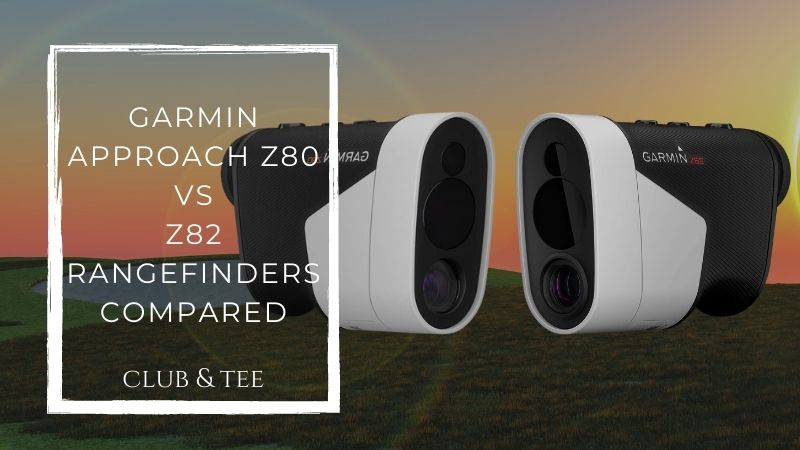 Garmin is arguably one of the best manufacturers as far as golf GPS is concerned. They are well known for their GPS wristwatches, smartphones, and other handheld devices. In addition, they have carried the same technology into the golfing world by introducing their Z series rangefinders.

The Garmin Approach Z80 and Z82 have made golfing easy. Gone are the days when you measured yardages through mental guesses and hoped on the accuracy of your guesses to hit targets. With the Garmin rangefinders with GPS technology, golfers can now measure yardages and lock on to targets as far as 1000 yards away.

*Some of the links in this page will be affiliate links, this means that if you purchase after following one, I make a small commission from the sale at no additional cost to yourself. Take a look at our About Us page for more info on this. 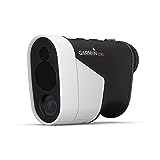 In this article, we will be paying close attention to both the Z80 and the Z82, looking at their similarities and differences to help you choose the best golf rangefinder for you.

Garmin is one of the well-known and reliable golf rangefinder brands in the market. Z80 and Z82 modes are two of the best golf rangefinders recommended by professional golfers. Both of them do have all the same features but the Z82 does have some refined specs and performance as an upgraded version.

The golf rangefinder has a rechargeable battery, golf GPS, image stabilization feature, all the essential golf GPS features, combined laser rangefinder technology, etc. Both rangefinders are perfect for amateurs, handicappers, and professionals. The Z82 is a solid rangefinder but it’s the additional features that make it stand out.

In a direct comparison between these two models, it is the Z82 that has an edge. Since the Z82 is an improved version, its overall rating is higher than the Z80’s. What’s your take? Here are the details to allay your doubts. The facts are genuine, but let’s talk about them. 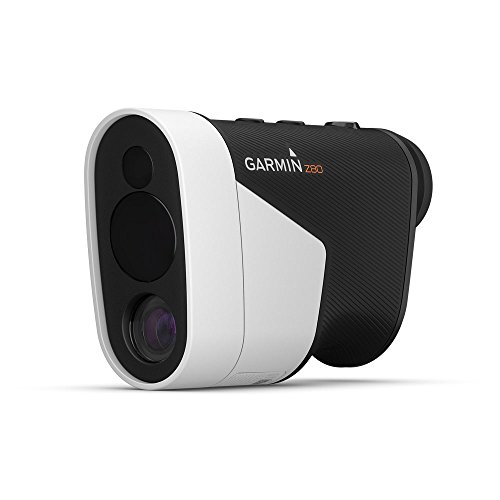 This rangefinder was released in 2018, and it is suitable for amateurs, handicappers, and professionals alike, and it’s no surprise why it is popular. The Garmin Approach Z80 incorporates golf GPS functionality and laser rangefinder technology all in one making it stand out as the very first manufacturer to do that.

The Z80 is also reliable because it can run without charging for up to 15 hours, and it is preloaded with over 41,000 courses making gameplay seamless and much more straightforward.

Talking about seamlessness, the combination of the GPS technology and the laser range finder mode makes for accurate readings, and you can see the distance to the pin and hazards simultaneously. This speeds up gameplay.

With the Image Stabilization feature, you can easily find the range and lock on flags. The Green View shows the distances to both the front and back of the green through the lens.

Coupled with the 2D full-color Course View, it is easier and faster to measure distances, lock on targets, and select what clubs for each shot.

Another standout trait of the Z80 is the PlayLike Distance which automatically adjusts distances depending on whether it’s an uphill or downhill slope. In addition, it turns the Tournament Mode on or off when required.

It is also equipped with the Laser Range Arc feature, which draws an arc on it’s view map, showing you the entire course and the distances in play.

The Z80 box contains the Approach Z80, a carry case, a micro USB cable, and a manual. With its numerous impressive features, there’s no doubt about the performance and reliability of this Garmin Approach rangefinder. 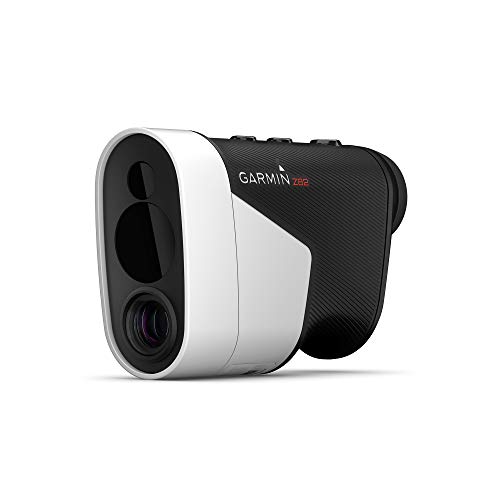 Released about two years after the Z80, the Z82 looked almost exactly like its predecessor in design, build, and feel until you take a closer look. The Garmin Approach Z82 proved to be an upgrade and a more advanced rangefinder than the Z80.

One of the most obvious upgrades of the industry’s most accurate golf laser range finder is the HD OLED display which presents better images on the viewfinder.

Like the Z80, this rangefinder has a 6X magnification. It can provide readings and lock onto targets within 450 yards and 10 inches of the flag with the same precision as its predecessor’s 350 yards coverage.

The Image Stabilization aspect was also upgraded with vibrational feedback when the target is locked. It incorporates all the other features of the Z80 but with more detail, precision, and added features.

For instance, the PlaysLike Distance, Laser Range Arc, Wind speed and direction, and Pin lock technology, for example, are still obtainable with the Z82 but more profound.

It also has remarkable GPS data (rangefinder data-enhanced accuracy) that can conveniently be used as a GPS device alone if you so wish.

The Hazard view allows you to have a quick look at each hazard using the map, and it fastens your gameplay and helps you decide what position your shot should be taken from. It also has an external indicator light for the tournament mode that notifies your partners when you switch modes.

The Garmin Z82 may look just like its predecessor, but it is by no means limited by it. On the contrary, it upgrades the Z80 with added features, making it a better option if you want something slightly better than the Z80 but with the same look and feel. You’ll have to spend a little extra to get it, though.

Side by side comparison

Having had some insight on both rangefinders, let us highlight some of the key features that both products have in common about their performance when placed side by side.

Both products look and feel exactly the same. You will have a hard time telling one from the other unless you see the model names inscribed on the body. They both have the same black and white colors and almost weigh the same.

The Z80 and Z82 both have the feature. This aspect draws an arc on the course view, giving you a complete view of everything in play.

They come with the Garmin golf app, and you can easily sync to the app with both products. In addition, they are equally equipped with 41,000 courses stored in this, and you can choose which one to play.

Both products have this aspect and help reduce shakiness, making finding the flag easier for players. However, the Z82 employs a vibrational feedback technique to notify you when a lock target.

Both products do the same thing, only that the Z82 does them slightly better. However, here are some of the key differences you should note when making a choice.

The Z80 weighs just 1 pound, while the Z82 is heavier. So if your preference is a lightweight rangefinder, the Z80 is as light as they come.

While both products incorporate the golf GPS and laser range finders, the Z82 provides far more accuracy, reaching up to 450 yards and 10 inches of the flag compared to the 350 yards offered by the Z80.

Both products boast about 10 to 15 hours of uninterrupted battery life, but the Z82 edges its predecessor a bit on that on a closer look. However, if both are fully charged and put through the exact amount and time of work, the Z82 will outlive it in battery life.

When Did The Garmin Z82 Come Out?

The Garmin Z82 was released in 2020 to upgrade the previous model Z80. It builds on all the features of the Z80 with some added features of its own, making it one of the most popular hybrid rangefinders in the market.

Does the Garmin Z82 Have Slope?

Yes, it does. However, you will have to set your Z82 to the PlaysLike mode to record the slope when playing; otherwise, you will only be able to measure distance.

The Z82 does not have a magnet mount like most other rangefinders. However, you can choose to purchase a magnetic strap differently to mount it on your cart when playing.

Does Garmin Z80 Have Slope?

The PlaqualityysLike quality is also obtainable on the Z80 to adjust yardages and distances for uphill and downhill slopes. You will also need to turn on the PlaysLike mode for this.

Yes, Approach Z82 has a vibrational feedback quality that notifies you with vibrations when you’re sealed in on the target. This is one of the added features that Garmin introduced with the Z82.

Does The Garmin Approach Z82 Have Stabilization?

Yes, the image stabilization aspect on the Z82 helps to easily find and range the flag. It also helps to reduce the impact of the shakiness of your hands.

Is The Garmin Approach Z82 More Expensive Than The Z80?

The Garmin Z80 and the Z82 are technologically advanced and feature-packed range finders. Although the Z82 slightly edges its predecessor based on its more advanced GPS and all-around features, the Z80 is also a great range finder if you prefer a more simplistic golfing experience, especially budget-wise.

The Z82, on the other hand, is a bit more complicated and pricey, but it offers the ultimate golfing experience.

Designed to improve golfers’ situational awareness and touted as the most accurate GPS range finder by the makers, we highly recommend the Z82 range finder, and you should consider it.