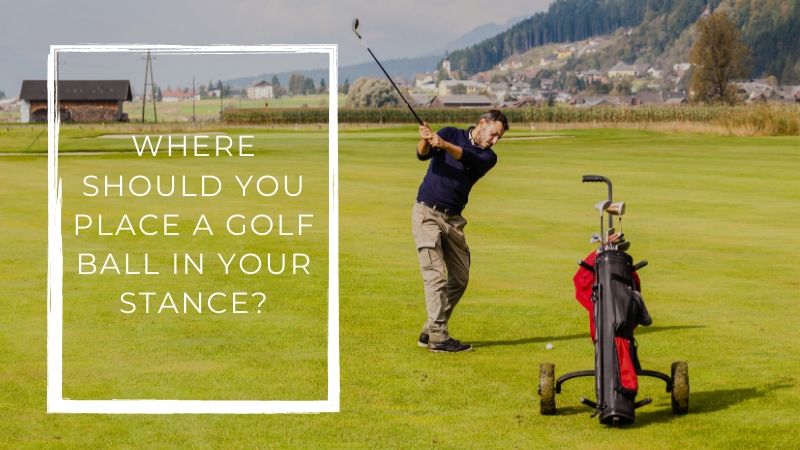 Golfers have all kinds of swing thoughts as they prepare to hit a shot. Keep your head still. Don’t slide. Tuck your shoulder under your chin. Keep your left arm straight. Don’t get quick at the top. All of these can work, but not if you forget something very simple before you start your swing — correct golf ball position.

Is the ball positioned correctly in your stance? Don’t believe me? Try hitting a driver with a ball on your back foot – how did that work?

So, we all agree that the golf ball position is important, but where should it be? There are two key factors to consider.

1) What club are you hitting?

2) What type of shot are you trying to play?

Once you make these two decisions, you can ensure the placement of the golf ball in your stance is in the optimal place.

What club are you hitting?

Let’s start with the basics and assume you are hitting a standard shot. You aren’t trying anything fancy, just want a nice solid strike.

When it comes to the Driver, there is no such thing as having the ball too far forward. If you are a right-handed golfer, you want the ball on the outside of the left foot. This helps you swing up on the ball and increase distance.

For 3-wood, 5-wood, and hybrids you still want the ball forward in your stance, but not as far as the driver. Make sure it is comfortable for you but recommend placing the ball on the inside of your left foot. These clubs don’t have a ton of loft and this will help you get them airborne.

As you start hitting long irons (3-iron, 4-iron, 5-iron) you still want the ball left of the middle of your stance – let’s say halfway between your left foot and the middle.

With your middle irons (6-iron, 7-iron, 8-iron, 9-iron) put the ball just barely left of the middle or in the middle. You will still get them up, but this will promote the down angle you want at impact.

Finally, its wedge time (Pitching Wedge, Sand Wedge, Lob Wedge) – place the ball slightly right of center and push your hands a little forward. This allow you to trap the ball, hit crisp shots, and place some spin on the ball.

Almost forgot the Putter. Putting styles are like fingerprints, everyone is unique. Start putting with the ball in the middle of your stance, but you can try other positions. If you make more putts, go with it. Players have found success on the greens while putting with the ball forward in the stance. Jack Nicklaus in the ’86 Masters for example!

Now it’s Time to Get Fancy

As you make your way around the course, you will run in to situations that require non-standard shots. Maybe you need to keep it low and out of the wind, or you need to escape from a bunker. The correct golf ball position is a critical component to pulling off these shots.

Try these shots on the driving range. Focus on ball position and make your normal swing. Determine which ones work best for you. Learning to escape from trouble can have a great impact on your scorecard.

There are so many things to consider when preparing to hit a golf shot, it can easily become overwhelming. If you pay attention to your ball position during practice, over time it will become second nature. It is a quick check as you setup to the golf ball, that can give you more control over your shots.

The ability to execute a variety of shots is one way to lower your score and handicap. You will be amazed how much you can change the way the ball flies, simply by moving it to different spots in your stance. Practice the basics, play around with some “fancy” shots and soon you will be impressing your friends with the “Tiger Stinger”!