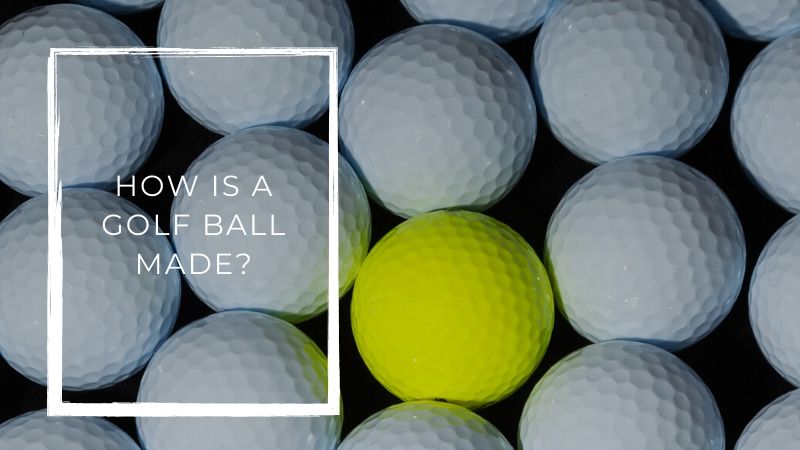 Just a small, white ball, correct? How much design and technology could really go into building a golf ball? Over the years, golf manufacturers have tried many different ways to build and improve on one of the smallest pieces of sports equipment, but how is a golf ball made and what does it take to construct the modern golf ball?

Coming Up show
A brief history of golf balls
What type of golf ball is in my bag now?
So how is a golf ball made?
What are the dimples for?
What is the most common number of dimples on a golf ball?
Does the modern golf ball go too far?
Final thoughts

A brief history of golf balls

Let’s take a quick look at the evolution of the golf ball and significant advancements since the game was first played in Scotland in the early 1400s. The first golf ball was made of hardwoods, such as Beech, but I doubt anyone was hitting them 300+ yards.

The next step was the “feathery” – this was made of leather, stuffed with feathers, and sewn together. Most golf historians agree that this style of ball was introduced in the 1600s. Due to the manual process of creating these balls, they were very expensive and some even cost more than clubs. Would hate to lose one in the sea.

The 1800s brought golfers the gutta percha ball, also called the “Gutty/Guttie” ball. Created by using the sap of the Gutta tree, the ability to mass-produce allowed golf to spread quickly. This is also when engineers started to figure out what became modern-day dimples. A new “Gutty” was smooth and players started to notice the ball went further, once it got scarred up from play. Golfers started nicking a new ball with a hammer prior to play, to help it fly further and straighter.

In the early 1900s, a one piece, rubber-core ball was produced. This provided even more distance and golf companies started trying different cores to determine what would work the best. You can argue, this is when golf balls took on their modern form.

Finally, in 1921 the R&A and USGA standardized the size and weight of golf balls, but at the time had slightly different rules. Over the years, the requirements have become aligned and additional rules have been added such as maximum velocity and spherical integrity.

What type of golf ball is in my bag now?

There are two types of golf balls currently on the market. The Two-Piece ball and the Multi-layer ball. The two-piece ball is simply made of a core and a cover. It typically consists of a solid rubber core and has a firm outer cover.  This design helps the ball fly further, straighter, and with less spin. The two-piece balls are great for beginners or high-handicappers and are less expensive than multi-layer balls and the ball flight will be less impacted by the odd loose swing.

A multi-layer ball can have 3, 4, or 5 layers. A simple way to think about it – more layers produces more rotations to the ball’s spin and potentially more control (if you know how to use spin to your advantage). Multi-layer balls are more expensive and designed for elite amateurs or professional golfers.

As an example, the Titleist Velocity golf ball is a two-piece. The Titleist Pro V1x is a 4-layer ball. Charles Barkley would most likely be better suited to play the Velocity, while Brooks Koepka uses the Pro V1x. You can feel the difference when you hit these different types of balls. The two-piece will feel much firmer off your driver or putter.

So how is a golf ball made?

Golf balls have a molded core made of several different ingredients but produce a rubber-like compound. Injection molding, compression molding, and heat are used to add the layers of the ball.

Spray guns are used to paint the balls as they spin, to ensure uniform coverage. The balls are stamped, and a clear coating is applied to finish off the process. Depending on the ball, it can take 10-30 days to build.

This has become a high-tech business and golf ball manufacturers use several methods to ensure consistent quality. They X-Ray the ball to confirm the core is perfectly round. Tests are performed to validate the balls meet the United States Golf Association (USGA) and R&A standards.

Several different machines (Iron Byron for example) are used to simulate play to ensure the new balls react as expected and most manufacturers even use wind tunnels to understand how the balls will fly when hit by external forces.

What are the dimples for?

There is no doubt that the dimples are what makes a golf ball such an iconic image. They are there to reduce the drag as it flies through the air. They force the airflow downward, which creates lift (similar to an airplane) and a ball with dimples can fly almost twice the distance of ones without.

What is the most common number of dimples on a golf ball?

All this talk about aerodynamics and airplanes, you may be surprised to know that the first patent for a dimpled golf ball was made way back in 1905.

Does the modern golf ball go too far?

As engineers learn more, golf balls may continue to improve, but a growing concern within the game of golf is the “distance debate”. Should we continue to allow new technology in the game? Should we rollback the golf ball – purposefully make it travel shorter distances? Do we need to create one ball for professional golfers and one ball for amateurs?

The best way to understand the concern – if a golf course was designed when players could only hit the ball 270 yards off the tee, does the layout of the course still make sense if golfers can now hit it 330 yards? Sure, the drivers are longer today, but most experts agree that the biggest difference in the game today versus 100 years ago is the construction of the golf ball.

It will be interesting to see over the next several years if golf companies continue to push for a better ball or will the USGA and R&A step in to reduce or eliminate the amount of technological advancements.

The next time you grab a ball from your bag, or hit a ball at your local driving range, think about how far we have come since the beginning of the game. We have transitioned from boiling goose feathers and hand-sewing leather to injection molds and 5-layer golf balls. Truly a remarkable improvement in technology that has no doubt made the game more enjoyable and enabled more people to take a stroll down a fairway.