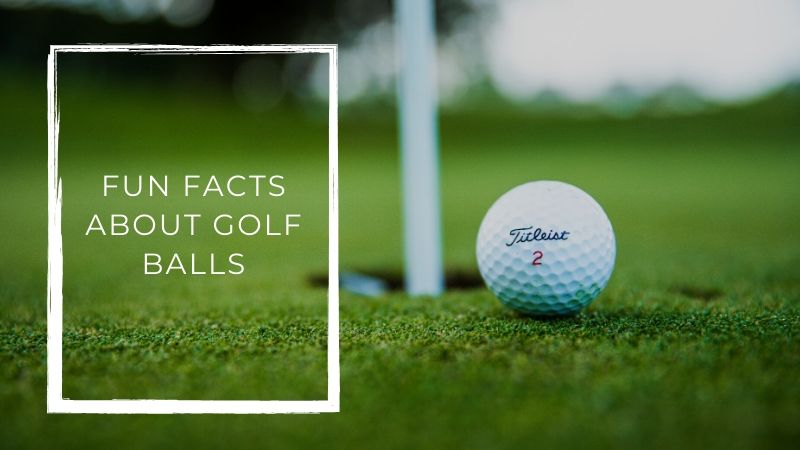 If you are an avid golfer, you have probably hit thousands of golf balls during your golf career. You have probably spent hours smacking yellow range balls and have tried many different brands. Do you have a collection of balls that you have saved over the years? Maybe logo balls from your favorite courses or from hole-in-ones.

The golf ball is both simple and complex. Let’s explore some fun facts about golf balls.

Coming Up show
The Good Old Days
Do you truly ever Own a Golf Ball?
Why are the Pros so Much better than you?
Gravity is holding you back
Why isn’t the Golf Ball Smooth?
A Presidential Past Time
My Yellow Golf Ball goes Further!
What happens if you run out of balls? Ask Tiger
Do my Golf Balls need a Humidor?
Final thoughts; fun facts about golf balls

At the beginning, the first golf balls were made of wood. As early as the 1400s in Scotland, golf was played using balls made from hardwoods like Beech. These balls were not perfectly round, so you can imagine the amount of curve produced in the Scottish winds.

On a side note, the modern tee was not invented until the late 1800s, so these wooden balls would be set on top of a small mound or sand or dirt. Quite often, each tee box had a container of wet sand that the player could use to mold a small hill to place their ball upon.

Do you truly ever Own a Golf Ball?

You may buy the golf ball, but how long do you truly own it? For most golfers, their balls are a short-term possession. The average player loses 2 balls per round and there are an estimated 4+ million golf balls lost every day.  The famous 17th hole at TPC Sawgrass claims 125,000 per year and that is one hole!

So where do they go? Well, many are found by other golfers and get to have a 2nd, 3rd, or 4th chance! We all know the joy of finding a “like new” ball that someone else lost. Are golf balls the most traded commodity in the world? Finders, keepers – losers, weepers.

What if they are never found? Depending on the type of golf ball, it will take 100 to 1,000 years for it to completely decompose.

Why are the Pros so Much better than you?

So yes, they have more natural talent and athletic ability. They most likely receive better coaching and instruction. A better understanding of how to play the game? Definitely.

They also hit a lot more golf balls. The average professional will hit 500 golf balls per day and that doesn’t count the time they spend chipping and putting. Typically practicing for 5-6 hours a day, 6 days a week.

Gravity is holding you back

We have all heard the story of astronaut Alan Shepard hitting a golf ball on the moon, but how far did it go? Physicists have estimated it traveled between 2 and 2.5 miles! Did I mention that he swung one-handed, with a 6-iron?

Compare that to the world record long drive on earth – Mike Austin’s 515-yard rip! Just think how long you would be without gravity getting in the way.

Why isn’t the Golf Ball Smooth?

One of the most interesting design principles related to the golf ball are the dimples. How many dimples does a golf ball have? You can find golf balls with anywhere from 300 to 500 dimples. The most common number of dimples is between 320 – 350.

A smooth ball would go about half as far. How do the dimples help the golf ball perform? Early Scottish players identified that as balls got older, with scratches/dings on them, they would go further. The physics get complicated quickly, but suffice to say, the golf ball manufacturers have developed the optimal dimple pattern to help the ball get lift and stay in the air longer.

A Presidential Past Time

Many Presidents of the United States have enjoyed playing golf, but none were more dedicated than Woodrow Wilson. He famously painted some golf balls red or black, so he could still playing during the winter – when there was snow on the ground.

No – it doesn’t. There is no evidence that the color of the ball impacts playability, so it comes down to personal preference. There are more options on the market than ever before. You can find white, yellow, orange, pink, purple, red, green, and occasionally black golf balls. Some players feel one color golf ball is easier to see than others, but that largely depends on weather conditions and/or grass/turf color.

The most recent addition is the “soccer ball” style that Callaway has produced. It can be interesting to watch your ball spin on chips shots, but the ball performs the same as others. If you want your ball to make a fashion statement, you have plenty of choices.

What happens if you run out of balls?  Ask Tiger

One of the craziest golf ball stories comes from Tiger Woods during his historic US Open win in 2000. He ultimately won the event by 15 strokes, but did you know he almost got DQ’ed on the 72nd hole?

On Sunday, he hit his drive on the 18th into the water. He didn’t know this at the time, but he only had one ball left in his bag! If he had hit a 2nd drive in the water, he might have been disqualified from the event.  Crazy to consider. There are options he could have taken that would have allowed him to finish the round with a two-stroke penalty, but an important lesson. Make sure you have enough golf balls to finish your round!

One additional rule to keep in mind. Some tournaments have a “one ball” rule, which means you can only play one type/model of ball throughout the event.

Do my Golf Balls need a Humidor?

Do golf balls degrade over time sitting in my closet? In the trunk of my car? In my golf bag?

Use common sense. Golf Balls can easily last for 10 years, assuming they are not stored in extreme temperatures. You don’t want to place your golf balls in a refrigerator or freezer. Your car trunk in the summer may be a bad idea as well; extreme heat can impact the balls performance.

So there you go, there is some knowledge for you to impress your fellow golfers during your next round or even celebrating your success in the 19th hole. Do you have any other interesting tidbits of information? We’d love to here them, share them with all of us by dropping it in the comments. Happy swinging.