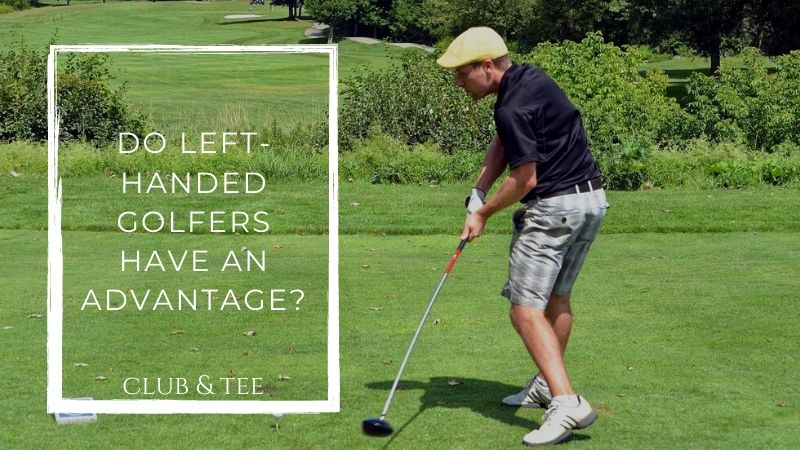 When we say left-handed golfer, who is the first person you think of? Most will probably say Phil Mickelson or Bubba Watson – we might even get a few Mike Weirs. The question we want to explore; did they have any sort of advantage because they play golf left-handed?

Is there something about standing on the opposite side of the ball that makes the game easier?

My first thought that comes to mind is “No, of course not”. How could there be an advantage? Being left-handed does not change the technique required to hit a driver or roll a putt into the hole. It does not help you handle the pressure of a major better or understand the best way to read greens.

But, what factors in the game of golf could make your dominant hand an advantage or disadvantage? Let us explore some of these elements and see if we can determine the answer.

Coming Up show
The Big Picture
Equipment Shortages
Do Course Designers Play Favorites?
Rolling the Rock
Do left-handed golfers have an advantage? – Conclusion

We should start by looking at some macro numbers. If you look at the world population, 10% of the people consider themselves left-handed. Less than 5% of the PGA tour plays golf left-handed. Left-handed players have 83 tour victories and 9 majors, but 75% of victories came from Phil, Bubba, and Weirs – these 3 players have 8 or the 9 majors (Bob Charles is the other).

In the last 25 years, ~6% of PGA tour events have been won by left-handed players. The vast majority coming from the 3 players mentioned above. This data does not clearly point to an advantage or disadvantage. You could argue that Mickelson, Watson, and Weirs are anomalies or outliers.

Next, we need to consider something that was almost certainly a disadvantage to the left-handed golfer 25 years ago and that is scarcity of equipment designed for southpaws. Your club selection was certainly limited as a child if you are currently a professional golfer. There are many players on tour right now that are naturally left-handed but play golf right-handed. The primary reason is when they started, they just could not find the right (I mean left) equipment.

The good news is that if you are just starting to play now or are interested in getting your child involved, this is no longer a significant problem. With a few exceptions, all clubs are now offered for both sides of the ball.

One interesting thought to consider – will we start to see more left-handed professional golfers over the next 10 years because the equipment has been readily available? Junior golfers starting the game can now find the equipment they need if they choose to play from the left side.

The equipment related disadvantage is a thing of the past but could still be impacting current professional win totals.

Even if we agree that certain courses favor one dexterity versus the other, this is not consistent across all courses. There will be just as many courses or holes that favor a right-handed player. There is no data to support that course design in aggregate supports one type of player versus another.

It is interesting to consider an ambidextrous player carrying one non-dominant club. If you can play golf either way, would it be worth it to carry one left-handed club (maybe a 3-wood) and use it when a tee shot favors swinging from that side of the ball? Phil Mickelson played with two drivers for a while; one was his “hook/draw” driver and the other was his “slice/fade” driver.

Finally, what about on the greens? The vast majority of players prefer putts that break towards their body. Right-handed golfers are typically more comfortable on putts that break from right to left. So, any putt that breaks from right to left, would probably be easier for the left-handed player. Doesn’t really work as an advantage – you cannot consistently control which way putts are going to break, but could this be a strategy worth trying?

A golfer could practice putting both left-handed and right-handed and could even find a putter that is reversable. In this situation, they could switch on each putt, depending on the direction of the break. Amazingly, some players have tried this approach, with varying degrees of success. Might be worth consideration but does not constitute an advantage for either type of player.

As you might have already guessed if you have ever watched Bubba stand over a short putt, there does not appear to a benefit to being left-handed on the greens. Maybe an advantage if you are good with both hands.

Do left-handed golfers have an advantage? – Conclusion

In summary, we did not identify any reason to believe that left-handed golfers have an advantage over right-handed players. If anything, the playing field has been leveled over the last 10-15 years as golf manufacturers have started providing lefty golfers with the same equipment options as their right-handed dominant friends.

Due to this change, will we start to see more left-handed players at both the amateur and professional levels? A junior golfer that started the game 10 years ago would not be forced to play righty. The number one ranked junior in world in 2019, Akshay Bhatia, is left-handed and he recently turned pro straight out of high school. Is he another anomaly like Mickelson or the start of a southpaw revolution?

Only time will tell, but if you are just getting started in the game and trying to decide which way to play, our advice is simple. Go with the what feels natural for you!