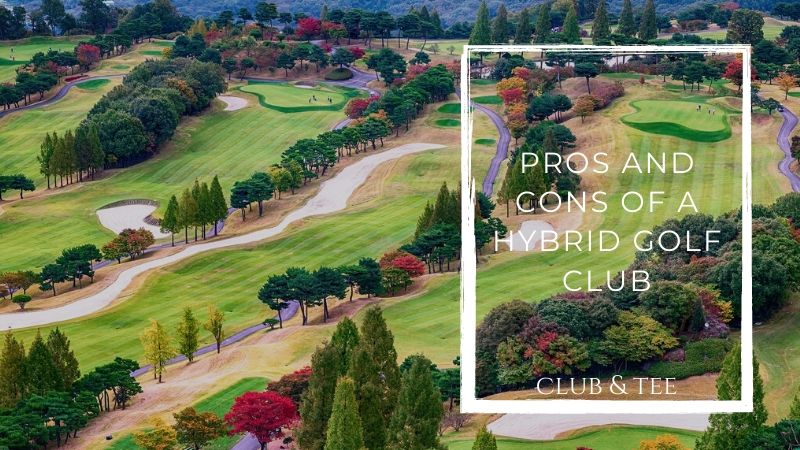 One of the most popular changes in golf over the last couple decades has been the migration from long irons to hybrids. Everyone from high handicappers to PGA tour players have added them to their bags, but how will they help your game? Is this something you should try? The short answer is YES. There are very few amateur golfers that will not see value in the hybrid club design but let us dig a little deeper.

Coming Up show
What is a hybrid club?
Why use a hybrid?
What is the downside to using a hybrid golf club?
Final thoughts on hybrid clubs

What is a hybrid club?

The hybrid is a combination of iron and wood design elements, thus the name. A simple description – it sort of looks like a small fairway wood, but it offered in much higher lofts. The hybrid was introduced to the golf marketplace in the early 2000s and quickly grew in popularity.

Its original intent was to replace long irons. Instead of having a 3-iron, you would have a 3-hybrid. While this continues to be the most popular loft of hybrids, you can now find entire sets of clubs that are more hybrid than conventional irons. More and more, game improvement “irons” include 2 – 5 hybrids in their sets.

Why use a hybrid?

Quite simply – they are easier to hit. While they were originally designed to replace long irons, they can be helpful as middle iron replacements, and even around the greens.

First, hybrids have made 1-irons, 2-irons, and 3-irons almost extinct in the game of golf. A hybrid of the same loft is easier to hit in the air, easier to control (draw or fade), and performs much better out of bad lies in the rough. If you still have a 1, 2, or 3 iron in your set, we can almost guarantee you would hit more quality shots by replacing it with a hybrid.

Second, more and more middle to high handicappers have found that they prefer hybrids over their middle irons (4-irons, 5-irons, 6-irons) for the same reasons. A hybrid is designed to launch the ball in the air and is easier to hit out of tall grass. You will not see many scratch golfers with “middle iron” hybrids, but if your handicap is 18+, it is worth consideration.

Finally, the hybrid can be an alternative if you struggle chipping around the green. They cannot be used out of greenside bunkers or if you need to hit a flop shot, but they are great for little bump and run shots. Any shot that you might use a 7-iron to chip with or if you ever putt from off the green, try your hybrid. The ball will come off the face with nice over spin and roll true.

The hybrid design is so versatile and provides the golfer with more options on the course. All players should think about which clubs in their bag might be holding them back and determine if a hybrid is the correct answer.

What is the downside to using a hybrid golf club?

Ok, so the hybrid is not perfect – everything has its potential flaws. There are a couple things that conventional irons do better, which is why elite players typically only use them to replace long irons.

First, they are harder to ‘flight down” than a normal iron. They are designed to help you get the ball in the air, but this will work against you when you need to keep the trajectory low. The best example – it is easier to hit a low punch from the woods with a 3-iron than a 3-hybrid – regardless of what you do, the 3-hybrid will try to get up in the air.

Second, the larger sole on a hybrid can feel too thick on the middle irons. If you can already hit nice, high 6-irons on to the green, you probably do not want to swap out that club for a hybrid. From our perspective, only beginners or high handicappers want to replace their middle irons with hybrid style clubs.

The hybrid is one of the only game improvement clubs that was originally designed to help high handicappers but has now made its way to professional tours around the world. Did you know that an estimated 70% of professional players now have at least one hybrid in their bag?

The question for amateur golfer is not “should I use a hybrid?”, it is “how many hybrids should I use”? They make the game easier and will allow you play a variety of shots that will help improve your scores.

To summarize, all golfers should strongly consider replacing their long irons with hybrids and middle to high handicappers might want a combo or progressive set of clubs (mix of hybrids and irons). Give one a try and before you know it, you may end up with 3 or 4 in your bag.

2 thoughts on “Pros and Cons of a Hybrid Golf Club: Should You Be Using Them?”